Back into the Liberal fold – #2

Back into the Liberal fold – #2

Before I start the Blog intended, may I first of all say a big “Thank You” to all those lovely Lib Dems who have expressed a real Welcome Back message to me following my first Blog about returning to the fold. It has been very heartening and heart-warming. Thank you! If you would like to follow my “returning to the fold” experiences feel free to add yourself to my Blog-followers. And if it pleases you to do so, then do pass it on to others you think may be interested.

It was lovely gardening weather last weekend (and lovely campaigning weather for politics too!) so, as I was raking the grass cuttings the other afternoon, I was also ruminating about what I should put into my next blog. I thought perhaps I could muse on the value of scarifying the grass in the spring, or ponder the double fan of con trails in the blue sky overhead and wonder where everyone might have been going – some to Europe and some to the USA.

And, strangely enough, that got me thinking about politics!

I cannot tell you how delighted I was that Trump was trumped on his attempt to wreak havoc on the Obamacare legislation – and speaking with several people since it seems I am not alone in mentally punching the air at his shortcomings. But, of course, it may only be a temporary setback for this dangerous man and there is a lot more damage he can do yet before he is ousted, which we can only hope will happen, sooner rather than later.

Indeed, this week has seen him sign documents turning back the clock on environmental issues and Climate Change which he appears to think is a hoax perpetrated by the Chinese. I noted the picture of him signing had him surrounded by middle aged white males yet again. It is not yet clear to me whether this represents him pandering to his perceived “constituency” of American rednecks, or whether it is simply a non-politician`s naivete about how things “look”. Actually, I rather suspect it is the former, driven on by his man with the cattle prod, Steve Bannon – but perhaps I am being too cynical, what do you think?

This week has also seen an “historic” (for the wrong reasons as far as I am concerned!) moment, this side of the Atlantic, as the Prime Minister signed the long heralded Article 50 letter to leave the European Union. Mr Tusk, in response, has already effectively slapped her wrist for seeking parallel discussions on Trade and Britain`s obligations towards the continuing EU27. The negotiating timetable and progress is now effectively in EU27`s hands and the REAL fight now starts. Already Boris and others have been back-pedalling on the dastardly link between negotiating on a trade deal and on the issue of security.

For me, the threat to NOT share security information if we did not get a good deal (which seemed implicit in Mrs Mayhem`s letter) was both petty and dangerous. Not just dangerous to the Europeans but, indeed, to ourselves.

OK, that`s enough commentary on world news. What about my experience of “coming back into the Liberal fold” I hear you ask. At least I shall pretend that I heard you ask!

Troubles with my car have meant I have been unable to get up to Gorton since I was there for Tim Farron`s visit, but I shall be going this coming weekend and will report back on that in due course. I have taken the opportunity caused by my temporary lack of mobility, to reintroduce myself to my local Lib Dems here in Nottinghamshire.

I was quickly invited to a meeting discussing the forthcoming County elections where we now appear to have a good chance of increasing our representation in a number of seats in the County. I volunteered to help with canvassing and since the weekend weather had been forecast to be warm and sunny, I suggested we might present ourselves in a “shopping centre walkabout”. It was agreed that we might locate ourselves in one of the areas that had not had so much Lib Dem activity in recent times – so that is what we did.

In fact it was quieter than we had anticipated, given the sunny morning on Saturday, but there was a steady, if slow, stream of people popping into the local Coop store and we had a significant presence in relation to the numbers of shoppers which was probably noted by passing traffic, too.

The picture here shows me on the left, with my new rosette chatting to the candidate for the area, Stuart Thompstone, as we waited for electors to pass by. We were there for about an hour and a half and during that time I guess I spoke personally to around thirty shoppers. 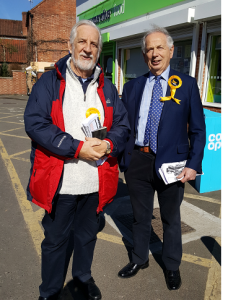 Of course we had our fair share of “well, I am rather busy, so cannot chat now” and “No, you`re alright thanks mate” – (why do people say that when they mean “I am not interested at all”? that has always puzzled me.)

However, I am very pleased to report that out of these 30 folk, I managed to persuade four of them to have a poster when they became available, and one of those four agreed also to deliver leaflets for us. That seemed to me to be a very favourable hit-rate amongst such a modest number of passers-by and suggests a pretty positive state of sympathy for Liberal Democrats which has yet to find its way into opinion poll ratings.

I found this very encouraging, so I am now looking forward to my canvassing in Gorton and Greater Manchester this weekend.

Just harking back to the local meeting which set up our shopping centre venture, I thought I should take the opportunity to introduce myself to the members there who knew nothing about me, so I gave a potted history of the seats I had fought as a candidate and my involvement in the Green Liberal Democrats and its forerunner organisation, the Liberal Ecology Group LEG (I recalled the delight I felt at being able to label myself as Chair Leg in newsletters and so on)

I also told my tale of my “claim to fame” involving William Ewart Gladstone and a handshake.  And my new local friends were all pleased to shake my hand after the story unfolded. I will not retell it here but I will refer you to a previous blog where I told the tale previously. Enjoy! Here`s the link below.